I love all vegetables, but I especially love cabbage. It’s down to earth, sturdy, and unpretentious; a reliable ingredient that is best in autumn, but is also grown year-round.

This recipe is fit to be a Thanksgiving centerpiece, which I realize is quite the statement for a meatless dish. When your family asks [again] ”What do vegans eat?”, you can bring out this showstopper! Bold in color and flavor, I guarantee that no one will miss the meat! If you can’t find purple potatoes, substitute purple yams or Yukon gold potatoes.

This recipe is based on Pommes Anna, a classic French dish of layered potatoes. This recipe takes about two hours——including sautéing, baking, and broiling——but will undoubtedly reward you for your efforts. A mandolin (not the one for music, although music may be nice) is highly recommended for fast and perfect potato slices which is a detail that stands out with repetition. 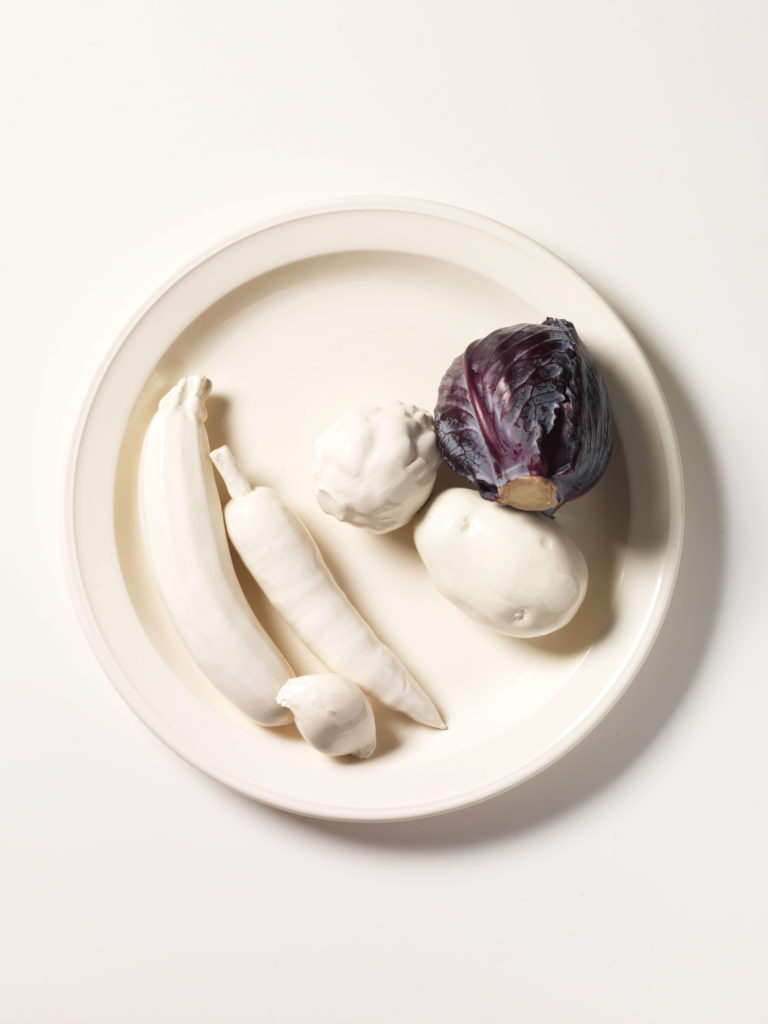 Make the red cabbage – In a 12″ skillet, heat the olive oil over medium heat and add the chopped leeks. Sauté for 5 minutes. Add the red cabbage and stir to combine. Cover, reduce to the to medium-low and cook for 10-15 minutes, stirring every 5 minutes.

Place the skillet in the oven and bake for 30 minutes until the cabbage is very tender.

Remove the skillet from the oven and scrape the cabbage mixture into a medium bowl. Add the cream cheese, cornstarch and za’atar, stirring well to combine. Set aside.

Rinse the skillet or wipe clean with a paper towel. Add 1 tbsp of melted butter. Starting in the middle of the skillet, place overlapping slices of potatoes, filling the bottom of the skillet and halfway up the sides with a double layer of potatoes. Brush with melted butter and season with salt and pepper. Top with the cabbage mixture. Repeat a double layer of potatoes/butter and salt and pepper on top of the red cabbage. Press the potatoes down evenly with a spatula. Heat the skillet over medium heat and cook the potato cabbage mixture for 5-7 minutes, lifting the edge with a spatula to check for browning. When golden brown, remove the skillet from the heat, cover and place back in the oven. Bake for 20 minutes. Uncover and turn the oven to broil. Broil until the top potatoes sizzles and become browned.

Remove from the oven and let rest for 5 minutes. Cut into wedges and serve with plant based sour cream, extra za’atar and a green salad.